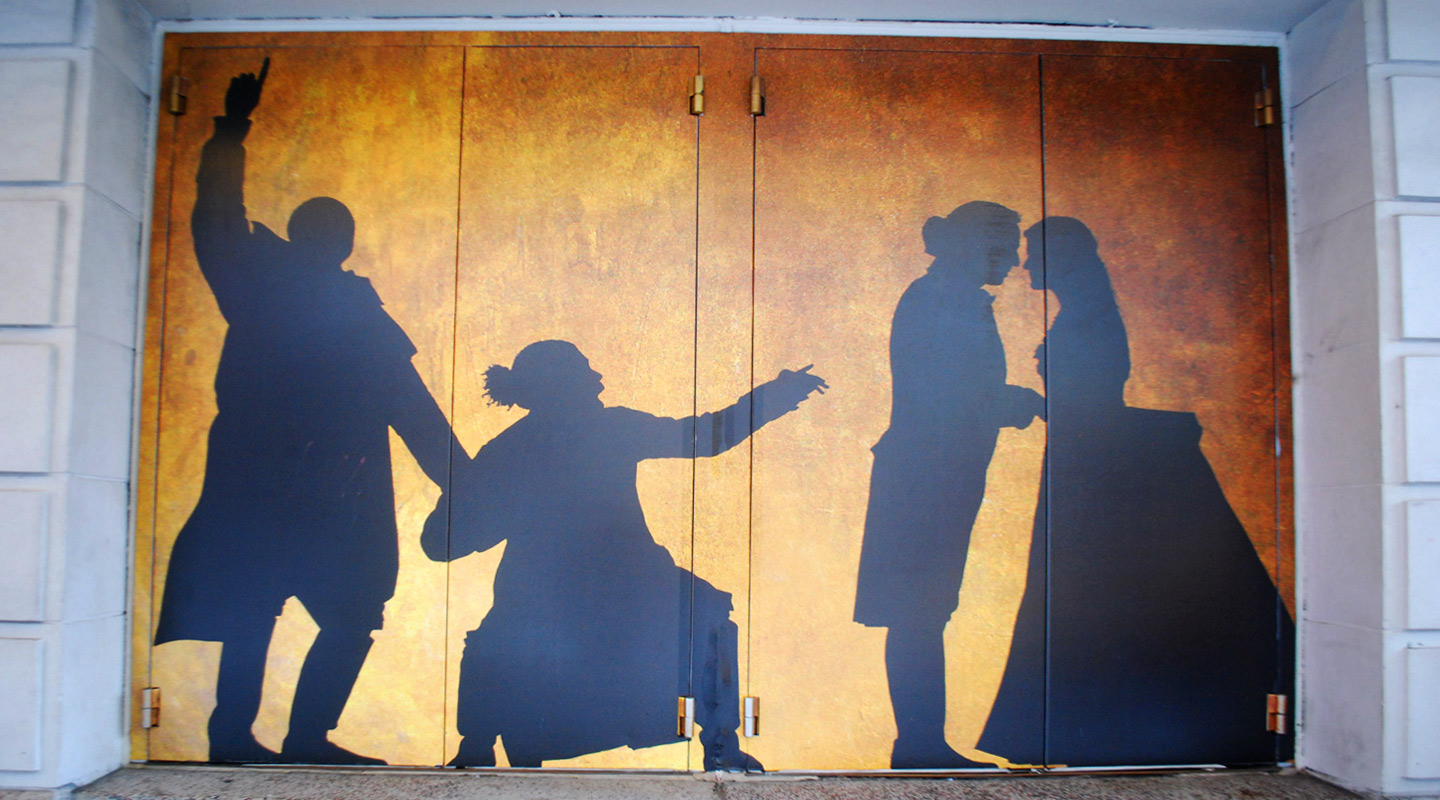 Posted at 18:09h in Business, Featured, Op-Ed by Pete
Share

It was Aristotle, from ancient Greece, who claimed that “nature abhors a vacuum.” If true, political and business leaders seem to be grappling right now with a collision of two vacuums: the unnatural incapacity of Government to fix social problems and the traditional hesitation of businesses to step up. If we believe that Aristotle is right, then nature will eventually resolve things. In the lab, vacuums typically end with violence. In real life there are welcome hints of forces at work to avoid it. Fearing violence and instability seems to have been an opportunity for the more nimble leaders in business to be agents of social change without waiting for Government. History is watching just as it did when a power vacuum threatened to bring down the United States of America at virtually the moment of its birth.

That’s actually a line from the popular musical all about this nation’s shaky early days: “Hamilton.” The exact wording is: “History has its eyes on you.” Back in 2015, the year the show premiered, these words jumped off stage to seemingly underscore with dramatic effect the significance of the Obama administration and the first Black President. That’s not wrong, but today we can also see in the “Hamilton” story a deeper parable about this year of transformations, crises and unrest that has set in motion a stark redefinition of business and politics.

Alexander Hamilton was easily among the least known persons biographer Ron Chernow had ever researched when he started to write his book about Alexander Hamilton that became the inspiration for the Broadway hit. In part, it was Chernow’s reputation as the author of acclaimed books about much more famous legends in the world of business that helped convince his publisher that Hamilton was a worthy subject. Any doubt about the significance, sexiness or relevance of the man on the $10 bill vanished once playwright and lyricist Lin Manuel Miranda turned Chernow’s academic biography into the tribal pop-cultural event the stage show “Hamilton” has become. What is it about Hamilton? Fans, historians and now business leaders suddenly have a new way of considering this question as Broadway prepares to reopen.

Chernow’s award-winning earlier biographies of business legends J.P. Morgan (“The House of Morgan”) and John D Rockefeller (“Titan”) or his portrait of the Warburg banking family have pointedly NOT become hit musicals. The reasons have partly to do with the ways in which business and especially business leadership have evolved in our time. The lives and successes of Morgan and Rockefeller lead directly back to Hamilton. Chernow understood early on that Alexander Hamilton’s vision of a central banking system and a powerful Presidency made those fortunes possible. The political choices of Hamilton may have led to his assassination by a political rival, but they also became the basis of the system that produced the vast fortunes of financier Morgan and oil tycoon Rockefeller.

So why no Broadway or Hollywood glitz for John D or J.P? Their fortunes were staggering and impressive even calculated in today’s dollars but Morgan and Rockefeller were flawed, widely reviled in their lifetimes and somewhat superficial characters. In the end Chernow sees them as empty caricatures of themselves, people who got rich early and stayed that way. Their personal legacies have largely vanished today. Not Broadway material, but the lives of these former Titans deliver surprisingly relevant lessons for the challenges facing business today.

Both Morgan and Rockefeller changed the nation by exploiting the potential of free, open and mass markets, markets enabled by the U.S. government and particularly the capital formation system devised by Alexander Hamilton. Questions of morality and social justice were political ones that Hamilton spoke endlessly and eloquently about, but they did not concern the moguls of the Gilded Age. It was only after facing the contempt of an entire nation (something he never really understood) did John D Rockefeller use his millions to essentially invent corporate charity by sponsoring revolutionary advances in public health and medical education. It was a strategic move, not a principled one, to counter the pubic hatred for his arrogance and ruthlessness.

In a strange irony pointing to our COVID chaos, it was medicine and public health that most benefitted from the Rockefeller guilt trip. The good works included the Rockefeller Institute of Medical Research, Rockefeller University, Johns Hopkins University and the University of Chicago, and the biggest of them all The Rockefeller Foundation kind of balanced out the bad press and the enemies John D. made. But the charitable work never had anything to do with the Standard Oil business.

Only Hamilton, virtually alone among the nation’s founders, believed that corporate success and good works were part of the same vast social and economic enterprise. The great American fortunes and the public works they produced as a byproduct were the confirmation of Alexander Hamilton’s belief that freedom, and justice were the foundations of prosperity and robust markets. He would have thought it absurd that Rockefeller would have to wait to be rich and hated before he could think about social justice and public health. It is sad indeed that Hamilton’s ideas would have slipped into obscurity while the mistakes of corporate overreach and treating public justice like public relations would be repeated again and again right up to our time.

Hamilton lived at a time when politics directed the intentions and values of the nation while business stayed in the shadows. The echo of those times resounds ominously today in our persistent racial tensions. Hamilton the fierce abolitionist anticipated that prosperity would eventually be impaired in a nation that would choose to continually postpone racial reconciliation. But business wanted no part of Hamilton’s brash activism, after all, it did get him killed.

So, America grew up thinking of the economy as operating on autopilot. Business made its own way while the political system maintained and adjusted political freedoms and infrastructure of open markets as necessary. Businesses avoided public issues, or anything that resembled social activism. Companies preferred to lobby aggressively in the shadows, to recycle the most obvious and credible symbols of national unity, like Uncle Sam and flag logos. Tradition was invoked, American Ingenuity was about technological advancement, medical breakthroughs, and large-scale industrial prowess like the moon landing, but the risky positions that might alienate customers were shunned and avoided. The closest business got to politics was to formulate the Reagan era principle that business leaders were generally more competent than political ones.

Today Hamilton’s vision of government is all but lost in the crippling divisions that are restated not debated in the halls of Congress. In place of new laws, it is new investigations the politicians vote on. Governmental institutions are in the shadows today, having turned concepts of freedom and justice into deadlocks and stalemates. It remains for President Biden and Congress together to prove that political institutions are capable of navigating and motivating useful change toward important political goals. But it’s unclear whether they can succeed or even if there is much time to wait and see.

The great surprise here is that while Government is stymied it is business that has begun to argue in words and deeds that social justice, economic equality, climate change and cultural diversity are keys to lasting prosperity in this century. Suddenly the economy has taken itself off auto-pilot for this transformation.

Broadway is about to restart. The musical Hamilton resumes on September 14th and on that opening night it may seem like a completely different work of theatre. With the hindsight of the year 2020 behind us Hamilton’s eyes of history are truly upon us asking this question: What does a fully INTENTIONAL economy look like? Can business adopt a social and political mission as a core identity from the acquisition of natural resources through the manufacturing process, the supply chain all the way to the waste stream with the good of the community as a first principle and an awareness of business impact in all areas? Businesses are becoming aware that to be prosperous they must be intentional.

You can even see it in Rockefeller’s old empire. EXXON is beginning to see itself as a custodian of the earth, not simply a harvester of energy and a reluctant but inevitable polluter. With government stymied, can businesses come out of their shells and save the planet? Do they want to? Should they? We believe they can. Many are already embracing it, sounding a little like the Broadway Hamilton who sings “I’m not throwing away my shot.”