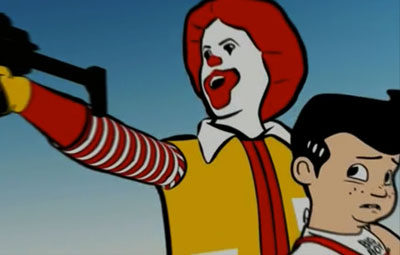 Posted at 12:51h in Business, Innovation, Op-Ed by Pete
Share

Consumers are obese, but not in the way you might think. They’re over-served and over-branded. They’re stuffed to the gills with logos.

The average U.S. supermarket, one right down the road from you, sells as many as 50,000 products. There are 16 varieties of Tropicana Pure Premium juices alone, for example, and PepsiCo will probably up it to 30 before long. That’s over-service. We don’t need it.

Recently, BlackBerry introduced Super Apps, apps that do what any app does, only a hair better. Here we go again. Another gold-platinum-titanium product cycle: Brands punching it out over incremental differences as if those tweaks were game changers. That’s branding a service to the customer that isn’t really a service at all; it’s just the natural evolution of things.

Too much choice doesn’t free us, it numbs us.

At a hotel I stayed in a while ago, there was a overly designed tag hanging on the shower head. “Unwind under a soothing shower,” it whispered. ‘Reflect in a fogless mirror. Enjoy personal space in abundance. Welcome to Reality Refreshed.’ It was signed, in a wickedly intimate corporate identity typeface, “Holiday Inn Select.” Here was a brand taking credit for a public utility — hot water — and that’s not just over-branding, it’s moronic. We don’t need it.

Trivial choices, too little time
What we do need is quality, not quantity. If your precious time — the thing your tenuous existence is actually made of — is siphoned off on fabricated choices over OJ and shower experiences, then you’re being routinely mugged on the street of life. But don’t take my word for it.

Psychologists are saying that too much choice doesn’t free us, it numbs us. We cope by opting out, making disinterested decisions. There’s a whole literature on the subject. Listen to Sheena Iyengar on “The Art of Choosing,” or Barry Schwartz on “The Paradox of Choice: Why More is Less,” both at TED. The consensus is that while the “pursuit of happiness” requires freedom of choice, too much freedom seems to cause anxiety and unhappiness.

Recently, when Procter and Gamble cut its Head and Shoulders product line from 25 to 16, profits rose 10%. Similarly, when General Motors shrunk its brands from eight to four last year, dealers reported a 16% increase in sales.

There’s a point at which new product development can destroy more value than it creates. Innovation for the sake of revenue just degrades the equity that the core brand has built up. Marketers call it “overshooting.” In the end, customers like you and me max out on “new and improved,” and we just stop buying.

People will pay a premium for good service
Recently, a Harris Interactive survey asked consumers if they would pay more for a superior customer experience. Eighty-five percent of them said yes. HBO is a great early example of this. They charged a fee to deliver better television drama. Replacing advertising with a “premium” meant no commercial influence on content, an irresistible platform for the best writers, and no interruptions for the viewer.

A 3-D printer already costs less than a laser printer did in 1985. And one day soon, probably when the Millennial generation reaches middle age, it will probably be a familiar sight around the house. Additive manufacturing — 3-D printing — will allow you to “print” a customized product in your living room while you watch a History Channel special on Obama’s two-term presidency. No more branded line extensions in that universe.

Values: The new way to add value
As for those Millennials, there are more 28-year-olds alive on the planet today than any other age group. They became adults in 2001, the year the earth moved. A year from now, they will be one-third of the U.S. workforce. In 10 years, they will be the backbone of all the major companies, managing the infrastructure and ready to inherit the leadership. And a few minutes after that, what they believe about business will be the only thing that matters.

By now, we all know what Millennial values are. Simply put, brands must benefit society as well as companies. They must generate what author Frederick Reichheld calls “good profits,” which create customer loyalty, and “bad profits” derived from promotional behavior in order to juice the quarterly numbers. And truth be told, it’s cheaper to create a customer for life than to fund an endless stream of transactional one-night stands.

Walking the walk
Costco defies the Wall Street feeding frenzy by refusing to mark anything up more than 14%. It bucks the retail trend by carrying only 4,000 products. And its fiercely loyal customers pay a membership fee — the premium — which keeps the company in very healthy profit. Champagne all round! (And by the way, Costco sells more Dom Pérignon than any retailer in the country.)

There’s ten years left to beat the addiction to innovation for innovation’s sake.

Fast Company recently covered the AIGA Living Principles, and as I read the roadmap, one question stood out: Can you communicate transparently about every aspect of the project? In other words, unless your company has nothing to hide and customers approve of what they see, it will become less and less fit to compete.

It seems to me there’s about 10 years left to beat the addiction to innovation for innovation’s sake and to replace it with innovation for society’s sake. After that, it doesn’t matter whether you’re in the oil business or the fashion business, good luck to you.

[Top image: A still from the Oscar-winning short film Logorama.]