Why Creative Communications Companies Should Relearn Their ABCs. 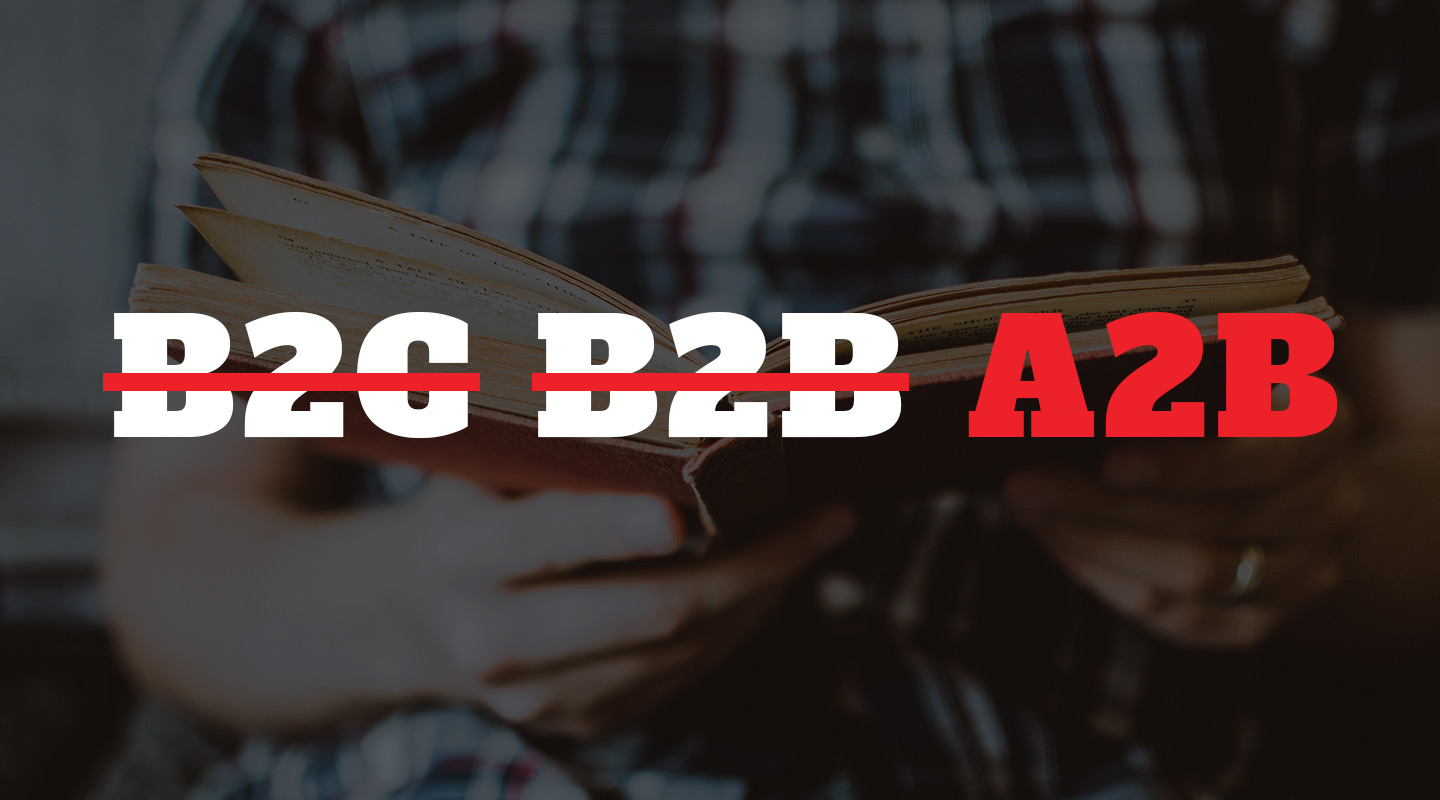 05 Sep Why Creative Communications Companies Should Relearn Their ABCs.

Posted at 04:30h in Business, Featured, Op-Ed by Pete
Share

By Graham Button for MEDIUM

In communications, we’ve been trained to think about business in two channels — Business-to-Consumer (B2C) selling directly to the end-user, and Business-to-Business (B2B) selling to other companies. Retail, and wholesale. One was sexy — the Mad Men flocked to consumer brands — and the other wasn’t. Even now, when consumer brands issue a request for proposal, creative companies line up to do free pitch work with a high risk of being thrown off the island anyway. Even in the post-analog world, young creative people yearn to make their dent in pop culture, but see no glory to be had in corporate culture. This, to me, is wrong-headed on two counts.

First, it’s so last-century. Second, only one thing matters in creative communications now, and that’s A2B.

The problem with ‘Business-to-Consumer’ is the word consumer. A ‘consumer’ sounds like a mindless, heartless, walking appetite. A zombie, a vacuum. Yes, we buy things, but does that make us morons? Isn’t the global business culture falling over itself to put the customer at the center of it all? To acknowledge the humanity, the diversity, and the integrity of the individuals who make up markets? Isn’t ‘consuming’ exactly the kind of behavior we’re trying so hard as a society to replace? Like the ‘fast’ in food, the ‘big’ in pharma, the ‘mass’ in production? Consuming, at this point, sounds a lot like planet-wrecking.

The problem with ‘Business-to-Business’ is that it ignores the new status quo of radical transparency. We have different language now. ‘Virtue signaling’, ‘purpose marketing’, ‘woke companies’, ‘triple bottom line’. Jargon? Yes, but the message is loud and clear. Business has become a glass house — everybody wants to look inside and see. Who’s doing what? Why? Is it right? Nike and sweatshops, Apple and rare earth metals, Patagonia and human trafficking. Nobody is squeaky-clean, but we need to know who’s trying. It doesn’t matter anymore whether you sell to end-users or supply people who do, you’re responsible.

Say “brand,” and people think B2C, because products clutter the mindscape and brands are the map. But now, we’re watching the rise of the Corporate Brand. One reason is public accountability, but another is survival. As products and the means to produce them become digitized, it gets easier every day for new competitors to enter a legacy space. Did the auto establishment see Tesla coming? Or Kodak, Sony? Or Blockbuster and then HBO and then everyone, Netflix? Micro-breweries made the big beer names sound like history — that’s why the Budweisers are now rushing to buy the Goose Islands and the Breckenridge Breweries.

When we were hunters and gatherers, we had an agrarian economy. Then we built machines to do everything, and became an industrial economy. Now we have software to run the machines, and we’re turning into an experience economy. In it, businesses try to create memorable encounters, and those memories — that Corporate Brand experience — becomes the product. This is as true for businesses like Intel, Pfizer, and Salesforce, as it is for Starbucks, Nordstrom, and Kanye West. In a digital media world answering to the crowd, brands live in people’s conversations, not in companies’ marketing. If you don’t manage your reputation, someone else will. In creative communications, it just doesn’t matter much anymore whether you’re B2C or B2B.

What does matter is whether you’re A2B.

Point A is what your company is today, Point B is what you aspire to become. People want to know the journey you’re on, they want to know why you’re in business. You win the crowd’s vote based on this narrative. Amazon’s Point B is to be the world’s most customer-centric company. Have they strayed from that road? Are they progressing? Are they doing it ethically? This is how we measure them. And, how we measure everything they touch — Whole Foods for example, a company they recently bought. Imagine what a corrupt reputation at the corporate mothership would do to the high-minded market positioning of the “Whole Foods, Whole People, Whole Planet” brand.

Your A2B narrative is critical, it’s a lightning rod for your culture as well as your markets. Why? Because out there, everything is up for disruption, it’s a world in flux. But one thing doesn’t change, and that’s we human beings. New tools maybe, but same hands. Once a spanner, now a screen, soon not even that. People are resilient and adaptable, but our fundamental needs are constant. Businesses exist to meet some of those needs — fail at this and you fail, period. Articulating and acting on your purpose is easier for new companies, who travel light, than for legacy companies. “I felt lost because we had become more focused on process than on purpose,” said TOMS founder Blake Mycoskie in a Harvard Business Review article in 2016. But his dilemma is now every company’s dilemma.

Take the auto industry. Say you’re a car manufacturer in 2018 — Point A. Aspiring to be the best car maker in the future, Point B, ignores what the markets — that is, end-users — are anxious about. What’s on their mind is gridlock and pollution, and the fact that their vehicles sit idle 90% of the day, filling valuable space and adding to congestion. They’re looking for new solutions, not just new cars. And even though you’re B2B, wholesaling to dealerships and fleet customers, the end-user calls the shots. So, your Point B needs to address this. Yes, it may change the way you do business, and that will be hard. But if the crowd doesn’t see you trying, they’ll count you out.

Of course, there are lots of car companies, each with its unique history, traditions, and design philosophy — its own DNA. They’ve all worked long and hard to carve out a differentiated space in people’s minds. Point A, a true reflection of how they operate and how they’re perceived, will be different for all of them. Point B, too, because they’ll need to make strategic choices on how to fight their corner in a marketplace that doesn’t exist yet. Creating a core A2B narrative is the one way to show everyone — stakeholders, employees, and customers — the commitment you’re making and the journey you’re on. And why they should share it with you.

That core narrative isn’t marketing, marketing is just one channel. People aren’t interested in brands, they’re interested in connecting with each other and the things they value, and in whether your brand can help them do it. Car makers have played a huge role in enabling people all over the world to connect in these very real human ways. This is a big story. But the question now, using this industry as an example, is how will they help in a world changing so fundamentally and so fast? The answer is at the intersection of a company’s business strategy, culture, and brand. Why? Because brand is where strategy meets the customer, and your culture can either deliver it or it can’t.

Our company has clients in both the old camps — B2C and B2B. Audiences and deliverables may differ, but our process doesn’t. Uncover the persistent, abiding truth of the service or company; work from inside (business strategy and culture) to outside (brand); and re-imagine A as B. This is detective work, it’s work that produces originality, it’s work with high stakes. There are whole stock markets full of companies which have not managed their corporate brand diligently, have no meaningful narrative, and need this work badly. They can either hire house-painters or architects. B2C and B2B thinkers, or A2B thinkers. It’s their game to win or lose. Either way, they answer to the crowd.